Tokyo, Japan - Otsuka Pharmaceutical Co., Ltd. (Head Office: Chiyoda-ku, Tokyo, Japan; President: Taro Iwamoto) today announced that its subsidiary Korea Otsuka Pharmaceutical Co., Ltd. (Head Office: Seoul, South Korea; hereinafter "Korea Otsuka") will release the UL・OS brand of men's skin care products in South Korea beginning on March 5, 2012.
Since its launch in Japan on September, 2008, the UL・OS brand has earned a strong following among its target customer segemnt of middle-aged men. As a result, Otsuka Pharmaceutical has decided to move forward with the overseas expansion of its cosmedics*1 business following three and half years of success in the Japanese market.

UL・OS is a total body skin care brand targeting middle-aged men that was developed based on 20 years of Otsuka Pharmaceutical's skin research under the concept"making skin healthy."
In Japan, the UL・OS brand represents a total body skin care line-up currently available in 14 items across seven categories, spanning from the face to the toes. In addition to its convenience of providing a total skin care solution in a single bottle, the UL・OS brand has also earned a strong reputation for its moisturizing effect, fragrance and texture. As a result, the brand has seen sales jump about 50% each year since fiscal 2009.

Although men in South Korea are highly conscious of their skin care needs *2, the market needs a new, convenient single-bottle skin care solution like the UL・OS brand that can be used for the entire body. As such, the UL・OS brand is expected to see positive growth in the South Korean market going forward. Initially, the brand will be available in seven items that span the five categories of"Skin Lotion,""Skin Milk,""Skin Cream,"Medicated Skin Wash" and "Refresh Sheet (medicated cosmetics)."Plans call for the line-up to be expanded in the future. Products will be sold primarily in drug stores as well as department stores and over the Internet.

Otsuka Pharmaceutical will market the value of the UL・OS brand in the South Korean market as it looks to establish a solid presence in the country where men are more conscious of their skin care needs. 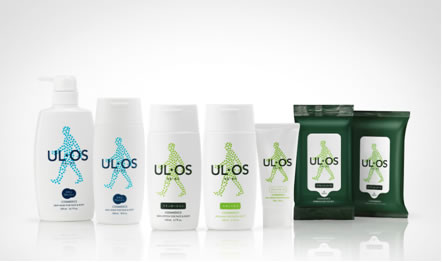