Tokyo, Japan - Otsuka Pharmaceutical Co., Ltd. (Head Office: Chiyoda-ku, Tokyo, Japan; President: Taro Iwamoto) today announced that it will participate as a core partner in the international conference TEDxTokyo 2012. The event will be held in Tokyo on June 30 by TEDx, which aims to present the world with ideas worth spreading.

Creativity is all-important for Otsuka Pharmaceutical, which considers whole-body human health as it continues its global challenge. It is a great honor for Otsuka Pharmaceutical to have been a core partner from the start of TEDxTokyo, a venue for creation and learning that brings together cutting-edge minds in diverse fields, with a focus on the three themes of Technology, Entertainment, and Design.

The ideas that spring from TEDxTokyo are truly creative and diverse. Otsuka Pharmaceutical offers its support in the expectation that ideas connecting to the next generation will be born from the event, and with the hope that the event's actively unfolding discussions will encourage creativity and activity in people in Japan, especially youth.

TEDx was created in the spirit of TED's mission, "ideas worth spreading." The program is designed to give communities, organizations and individuals the opportunity to stimulate dialogue through TED-like experiences at the local level. The concept has gone viral with events in more than 60 countries.

As the first international TEDx event in what has become a global phenomenon, TEDxTokyo has been a pacesetter in organization, coverage and range of our presenters. At our third event in 2011, a total of 33 presenters took to the stage in front of a live audience of 350 participants with a staggering 50,000 virtual viewers joining online, clocking up almost 100,000 views of the three live video streams (including simultaneous interpretation in English and Japanese).

In addition to the main annual event, TEDxTokyo continues to support a wider ecosystem including TEDxTokyo yz, TEDxYouth@Tokyo, TEDxKids and TEDxTeachers 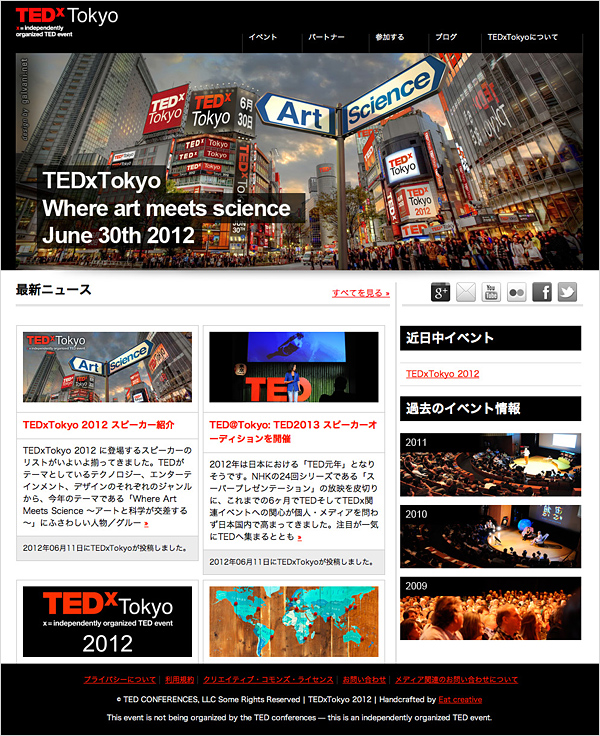