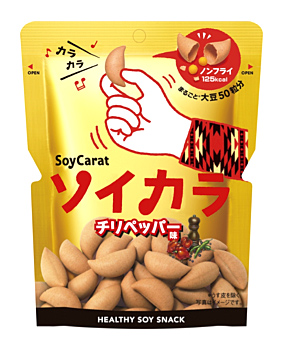 Driven by increasing awareness of health issues, the market for snack foods made mainly from nutritious ingredients such as beans or vegetables has grown rapidly and is currently valued at almost ¥20,000 million*3. In 2012, Otsuka Pharmaceutical launched SoyCarat as a casual, fun and tasty way of enjoying the nutritional benefits of soybeans such as soy protein and dietary fiber. The fun of SoyCarat is the rattling sound each "bean" makes when shaken. A single pack provides the nutrition of approximately 50 soybeans, and the snack is baked, not fried, keeping calories down to approximately 120 kcal per packet. It's also a low GI food, meaning that its sugars are absorbed more slowly, making it potentially beneficial for weight control. Beginning with the original Cheese flavor, followed by Olive oil & Garlic and Nori & Natto flavors in 2013, SoyCarat has become popular as an evening snack for adults. The new characteristic, "spicy soy" flavor was developed in the quest for flavors to appeal to an adult palate.

Based on the concept of 'Soylution' - that soy can provide solutions to human health and environmental issues -Otsuka Pharmaceutical has been developing new forms of soy products that offer delicious new ways for people around the world to enjoy benefits from whole soy nutrition. Introduced in 2006, SOYJOY- baked soy bar, is now sold in 11 countries and regions around the world. In Japan, SOYJOY Peanuts was introduced in 2013, followed in 2014 by SOYJOY Almond & Chocolate, popular as a between-meal snack for business people, thereby broadening the brand's appeal and the situations in which it is eaten. SOYSH, a sparkling soy beverage released in 2010, and SoyCarat, a healthy soy snack launched in 2012, were both developed with global markets in mind. All items in SOYJOY and SoyCarat are recognized as being low GI foods*4.Otsuka Pharmaceutical, based on the corporate philosophy of 'Otsuka-people creating new products for better health worldwide' will continue to develop innovative products that contribute to the health of people the world over.