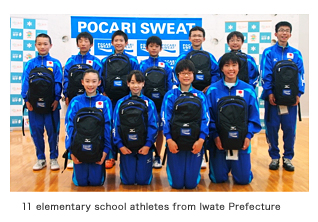 Tokyo, Japan: Otsuka Pharmaceutical Co., Ltd. (Head Office: Chiyoda-ku, Tokyo, Japan; President : Taro Iwamoto) will invite junior athletes to the 17th Asian Games to be held in Incheon Korea starting September 19, 2014, where POCARI SWEAT will support athletes and attendees as the official beverage for Asia's largest sports event. Conceived as a program to give junior athletes an opportunity to experience the atmosphere of world-class competition, the Otsuka "Next Generation Athlete Development Project" invited 11 sixth-grade elementary school students from Iwate Prefecture in Japan's Tohoku region to the Incheon Asian Games. In addition to serving as Escort Kids for the men's soccer final to be played on October 2, the young athletes will also have an experience of a lifetime to watch world-level play and observe the conditioning and support infrastructure for national team athletes at the Games.

On Sept. 15, Otsuka Pharmaceutical staff visited the Iwate Prefecture town of Hanamaki to present items such as POCARI SWEAT and Calorie Mate to support the conditioning of local children who are active in sports. At the presentation ceremony, Ayana Tahara, a top-ranking athlete in local track-and-field competitions, spoke on behalf of the participants. Sharing her dream with us, she said, "This is the first international competition I'll see in person. I hope to see how top athletes prepare before competition, including what they eat and drink. I would like to apply what I learn for my own races so that I can compete in international events when I'm in high school."
Reiichi Mikata of Iwate Super Kids, the Iwate Prefecture chapter of the National Talent Identification & Development program, commented, "I think it would be a great experience for the children to meet with national team athletes and see their support regimens while the children are still young, even as they look forward to performing internationally. I hope they will apply what they learn to their own training, and make an effort every day to better themselves as people and shine on the world stage."

Since the launch of POCARI SWEAT, Otsuka Pharmaceutical has continually promoted awareness about the importance of fluid and electrolyte (ion) replenishment in all sorts of scenarios. From 1991, Otsuka has partnered with the Japan Sports Association to provide information on protecting against heat disorders during sports activities. The company also supports athletes and organizations involved in international events such as the Asian Games. Otsuka also supports domestic athletes at events like the Inter-High School Championships, as well as playing an active role in various sporting organizations and youth sport associations. Otsuka gives these children the opportunity to meet with star athletes so that when they grow up, they will contribute by nurturing the next generation of athletes. Otsuka launched this "Next Generation Athlete Development Project".
When the populations of all the countries involved in the Asia Games are added, the total comes to approximately 3.8 billion persons*2, roughly half the world's population. Otsuka Pharmaceutical believes that the promotion of sports is important for peoples' health in this ever-growing and transforming Asian region, and this is the basis for participation in the Asian Games as the supplier of POCARI SWEAT, the official beverage of the Asian Games. POCARI SWEAT--currently sold in 17 countries and regions mainly in Asia--is supplied to top athletes and organizers at the Asian Games. Otsuka also contributes to better health by advocating the importance of staying hydrated, replenishing electrolytes, and taking in nutrition through various promotional activities aimed at international spectators at the Asian Games.

So that top Asian athletes may head into competition at their optimal condition using the beverages they routinely drink, we will supply the various competitive sites with free supplies of POCARI SWEAT*3 and SOYJOY*4 that are marketed primarily in Asia.

At the opening ceremony site on Sept. 19th, the Incheon Asiad Street was the site of corporate exhibits. Otsuka Pharmaceutical set up a booth that reminded spectators from around the world about the importance of hydration and electrolyte replenishment, because of sweating during sports and everyday activities.

Otsuka Pharmaceutical began its overseas business with expansion into Asia, beginning with a joint venture in Thailand in 1973, followed by others in Taiwan and Indonesia in 1974. In 1980, POCARI SWEAT debuted as a health beverage. True to the concept "beverage for sweat," it was developed to smoothly replenish fluids and electrolytes (ions) lost through perspiration. From its Japanese beginning, POCARI SWEAT has become a global product that is sold in 17 countries and regions worldwide, and overseas sales have grown to surpass domestic sales*5. For over thirty years, the Otsuka Pharmaceutical Saga Nutraceuticals Research Institute has continually sought insight on beverages that rapidly replenish fluids and electrolytes lost through perspiration.

In South Korea, the host nation and stage of the 2014 Asian Games, POCARI SWEAT has been produced and sold since 1987 by Dong-A Otsuka Co., Ltd. It has become highly popular in sport-related activities as evidenced by four straight years as the No. 1 brand in national customer satisfaction surveys, and it continues to be widely supported as a beverage that contributes to health. The Asian Games will be a springboard for boosting the advocacy of replenishing fluids and electrolytes lost through perspiration from exercise and sports. As part of this initiative, POCARI SWEAT bearing the Asian Games logo will be sold and special Asian Games commercials aired.