TAKECAB, discovered by Takeda, is a new medicine for treating acid-related diseases with a novel mechanism of action called potassium-competitive acid blockers (P-CABs) which competitively inhibits the binding of potassium ions to H+,K+-ATPase (also known as the proton pump) in the final step of gastric acid secretion in gastric parietal cells. TAKECAB provides a strong and sustained acid secretion inhibitory effect.

The approval granted is based on the results of multiple Phase III clinical trials for TAKECAB in Japan. Takeda has conducted trials for indications including gastric ulcer, duodenal ulcer, reflux esophagitis and H. pylori eradication. In these trials, TAKECAB demonstrated efficacy and has a favorable profile for safety and tolerability.

Takeda and Otsuka executed an agreement at the end of March 2014 to co-promote TAKECAB in Japan. Under the agreement, Takeda will manufacture and market TAKECAB, and Takeda and Otsuka will jointly conduct informational activities for healthcare professionals. Through this partnership, the two companies aim to address issues related to the treatment of acid-related diseases and address unmet clinical needs in the gastrointestinal field. 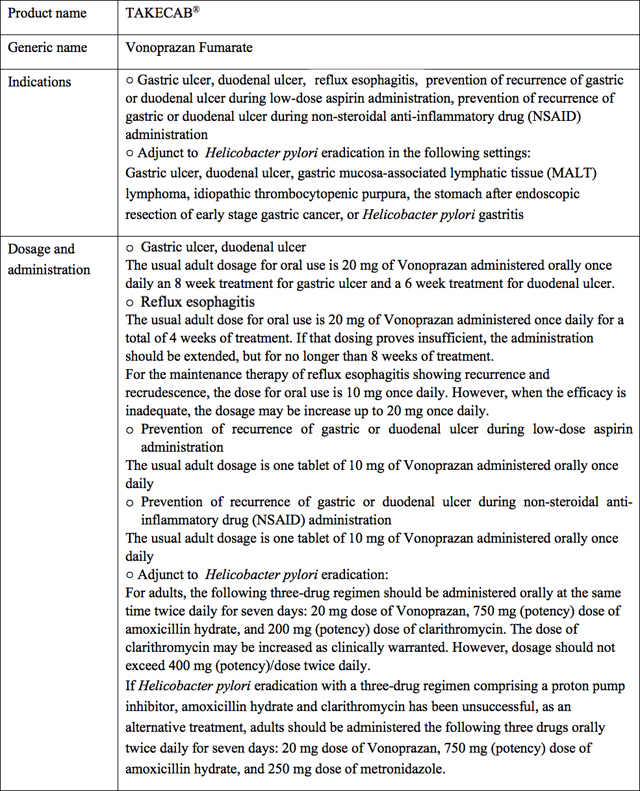 About the co-promotion agreement

The details of this agreement are as below:

Further details are not disclosed.

15 OCT 2020
Otsuka and its subsidiary Astex announce results of phase 3, ASTRAL-2 and ASTRAL-3 trials of guadecitabine in patients with previously treated AML and MDS/CMML