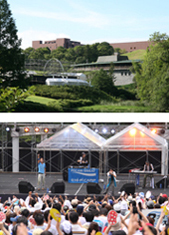 Music fans from near and far flocked to the hilly green environments of the Tokushima Wajiki Factory to see performances by popular artists Aqua Timez, ET-KING, Kariyushi 58, SEAMO, and Miho Fukuhara after the opening act by Kimaguren. Approximately 10,000 spectators, young people and families alike, turned out to cheer the enthusiastic performances under the summer sun. The factory production line was also opened to the public, where visitors had an opportunity to view the production of SOYJOY fruit soy bars.

Organized in partnership with local businesses with the goal of revitalizing and contributing to community development, Exciting Summer in Wajiki was first held at the Tokushima Wajiki Factory in 1990. Featuring promising young artists, the mid-summer outdoor concert, timed to coincide with the famed Tokushima Prefecture Awa Odori summer festival, has become a popular annual tradition. Over the years, Exciting Summer in Wajiki has grown to become one of the Shikoku's largest outdoor musical events.

The Tokushima Wajiki Factory was conceived as a factory park, integrated with its community and with its surroundings. The facility includes an outdoor stage surrounded by greenery and a large, open space accented with artwork. As part of efforts to preserve the natural environment, volunteers from Tokushima Wajiki Factory cooperate with members of the Wajiki Junior Chamber of Commerce and Industry in regular clean-ups along the banks of the Nakagawa River and in and around local camping areas as part of local 'adopt-a-river'* activities.

Based on its corporate philosophy of 'Otsuka - People creating new products for better health worldwide', Otsuka Pharmaceutical Co., Ltd. is dedicated to contributing to the health of people around the world.