Results of the two Japanese clinical trials, phase II/III J-RAPID Study*3 and phase III HIKARI Study*4, showed treatment with certolizumab pegol was associated with a rapid and sustained reduction in RA signs and symptoms and inhibition of joint damage progression. Utilizing these two data, UCB plans to file a marketing authorization application for certolizumab pegol in Japan by early 2012.

In June 2008, Otsuka Pharmaceutical and UCB Group have signed a contract to jointly develop and market the anti-TNF-alpha certolizumab pegol. Certolizumab pegol has been marketed by UCB Group under the brand name Cimzia® for the treatment of Crohn's disease and rheumatoid arthritis in US, EU and other regions. 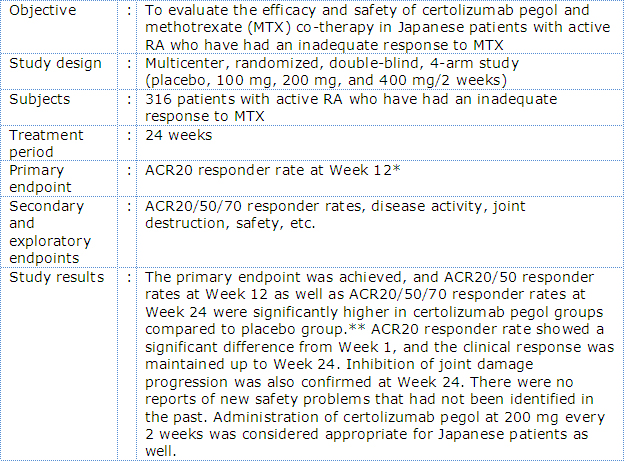 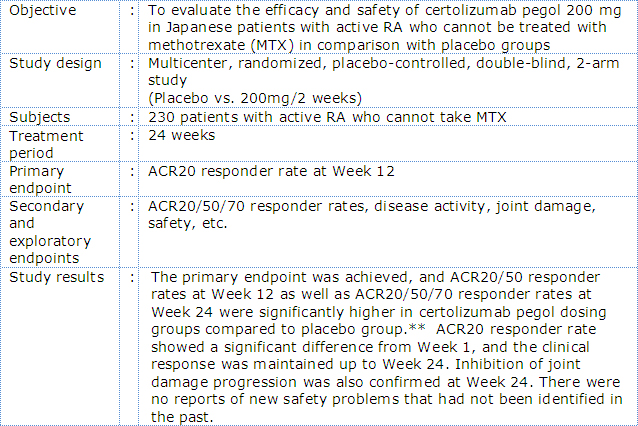 RA is thought to stem from various underlying causes, though its pathogenesis is yet to be elucidated. It is an inflammatory disease primarily manifests as arthritis, more frequently seen in women with a peak age of onset between 30s and 50s, having a morbidity rate of approximately 0.5% to 1%. RA used to be assumed as a malignant disease to have gradual and progressive degeneration of joints after the disease onset, but it is now known that joint damage rapidly progresses during the early stages of onset and that the average life expectancy is shorter in RA patients according to overseas data. In addition, recent attention is focused on social and economic losses associated with RA, and the emphasis is placed on the importance of disease control with early diagnosis and treatment. Under these circumstances, therapeutic trend has changed in recent years to seek suppression of joint damage progression and complete remission instead of conventional therapeutic goals of pain relief, maintenance and improvement of joint function, and improvement of daily activities.

15 OCT 2020
Otsuka and its subsidiary Astex announce results of phase 3, ASTRAL-2 and ASTRAL-3 trials of guadecitabine in patients with previously treated AML and MDS/CMML