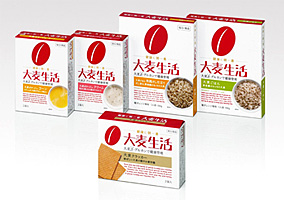 On September 1, Otsuka Pharmaceutical Co., Ltd. (Head office: Tokyo Japan; President and Representative Director: Taro Iwamoto) will launch the new "Omugi Seikatsu" brand line of 5 new products in 3 distinct forms - Omugi crackers, Omugi rice, and Omugi soup - all of which are rich in barley beta-glucans.
Barley beta-glucans act to control the absorption of glucose. Including Omugi Seikatsu as part of one's breakfast will have a beneficial effect on the meals that are eaten throughout the entire day, not only breakfast. Omugi Seikatsu is therefore an entirely new breakfast concept for health-conscious consumers.
Barley beta-glucans have been found to promote health in various ways, and have been the focus of much attention in the US and Europe.
Although barley beta-glucans are found in greater quantities in barley grains (approximately 3-6%) than in the grains of other grasses, because of barley's distinct flavor as well as the difficulty of processing them, it has proven difficult to bring barley beta-glucans to market.
Otsuka Pharmaceutical concentrated our efforts on the functional value of barley, and used a type of barley that contains beta-glucans in greater quantities (approximately 10%) in order to develop a product that would be a palatable breakfast food. In particular, each box of Otsuka's "Omugi Rice" recreates the flavor of freshly cooked barley rice and provides 3,000 mg of barley beta-glucans, yet takes just two minutes to prepare using a microwave.
Otsuka Pharmaceutical is advocating the benefits of barley, and proposing a new way of eating a barley beta-glucan enriched breakfast.