Providing Free Health Care to Over 700,000 Afghan Refugees :
The 10th Anniversary of the "Otsuka Welfare Clinic" 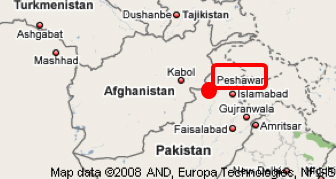 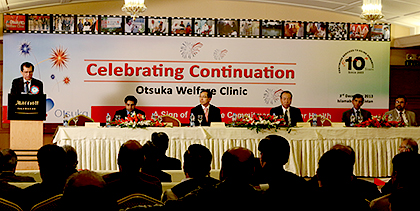 On December 3, Otsuka Pharmaceutical Co., Ltd. (Corporate Headquarters: Chiyoda-ku, Tokyo, Japan; President and CEO: Taro Yamamoto) held a ceremony in Islamabad to celebrate the 10th anniversary of the Otsuka Welfare Clinic, which was founded in Peshawar, Pakistan in order to provide health care to Afghan refugees. About 100 guests, including the Ambassador of Japan to Pakistan, Mr. Hiroshi Inomata, attended the ceremony.

The 1.8 million refugees who fled to Pakistan from neighboring Afghanistan in the wake of the September 11, 2001 terrorist attacks in America ended up in a refugee camp in Peshawar close to the border without food or clothing. At that time, Otsuka Pakistan donated infusion solution products through the Red Cross but, as a company that was looking to expand in Western Asian and Arab countries, Otsuka Pakistan felt a strong desire to be more involved in directly helping the refugees, and began studying what could be done. Ultimately, a decision was made to provide free health care people at the refugee camp who did not have access to adequate medicine, and the Otsuka Welfare Clinic was established in 2003.

Today there are still 1～1.2 million refugees living in Pakistan. The refugees still do not have access to appropriate medical care, approximately 150 people a day, mostly women and children, have been coming to the Otsuka Welfare Clinic, which has treated more than 700,000 people since it opened.

His Highness Mr. Hiroshi Inomata in his speech as Chief Guest applaud all those who are working at Otsuka Welfare Clinic as well as those who are supporting their cause and praised them very highly. He also appreciated role of Otsuka Pakistan in continuous running of this clinic for patients coming from Afghan refugees and local residents.

In order to be able to coordinate activities with all Otsuka Group companies doing business in Western Asia and Arab countries as a single unit, and to construct a firm foundation for future business in the region and cultivate opportunities for new business ventures, Otsuka Pharmaceutical launched the Otsuka International Asia Arab Division (OIAA). Masayuki Umeno, Vice-President and Otsuka Board Member with overall responsibility for Western Asia and Arab countries, said "With the support of many others, the Otsuka Welfare Clinic has for 10 years been able to provide health care to many refugees living in Peshawar. As a health care company, Otsuka will continue to support the health of people around the world."

Under Otsuka Pharmaceutical's corporate motto of "Otsuka - people creating new products for better health worldwide," Otsuka will continue to develop businesses that make it their mission to support the health of people everywhere on Earth, and will continue pursuing its vision of improving health and contributing to local societies as a health care company. The 25 companies in the Otsuka Group in Western Asia and Arab countries, including Otsuka Pharmaceutical and Otsuka Pakistan, are working to put down roots in the region to continue improving the lives of the local populations.