Otsuka Pharmaceutical was Awarded "Diversity Management Selection 100" from the Japan Ministry of Economy, Trade and Industry 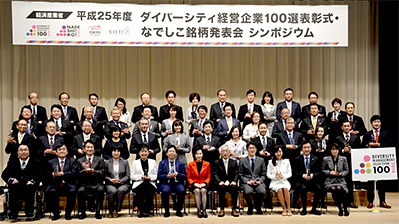 Otsuka Pharmaceutical (headquartered in Tokyo and led by Taro Iwamoto, President and CEO) has been praised for its forward-thinking efforts to motivate and further the careers of its female employees. The result, Otsuka being awarded the "Diversity Management Selection 100" from the Japan Ministry of Economy, Trade and Industry. Otsuka Pharmaceutical is the first pharmaceutical company ever to receive this award.

The "Diversity Management Selection 100" award is presented to companies that the Ministry of Economy, Trade and Industry has identified as having improved the company's value through promotion of diversity. The Ministry intends to give this award to a total of 100 companies over a three-year period, which started in 2012. In 2013, the second year of the program, 127 companies applied for the award, and 46 received it.

Since the 1980s, when the concept of "diversity" was not yet widely recognized, Otsuka Pharmaceutical has believed that the creation of innovative products and ideas requires utilizing the talents of a diverse group of individuals who are not constrained by gender or other prejudices. The Otsuka senior management has been promoting diversity aggressively since then. Starting in the 1990s, Otsuka made a more female-friendly workplace a specific goal, with initiatives that included organizing "Women's Forums."

Otsuka has aggressively promoted women to leadership positions in a wide range of departments and projects, from research to production to marketing. Women account for 11.4% of Otsuka Pharmaceutical' executives, compared to industry average of 1.2%*3. More than 20% of Otsuka's MRs are female, compared to an average of 10% at other companies.*1 The number of female Otsuka employees who continue to work after giving birth is 11 times higher than what it was 6 years ago in 2007 when Otsuka Women's Workshops were first held. Otsuka has also implemented flexible work arrangements to allow for child care and has made it its goal to open more company day care centers. Otsuka received the "Diversity Management Selection 100" award in recognition of these accomplishments and initiatives. 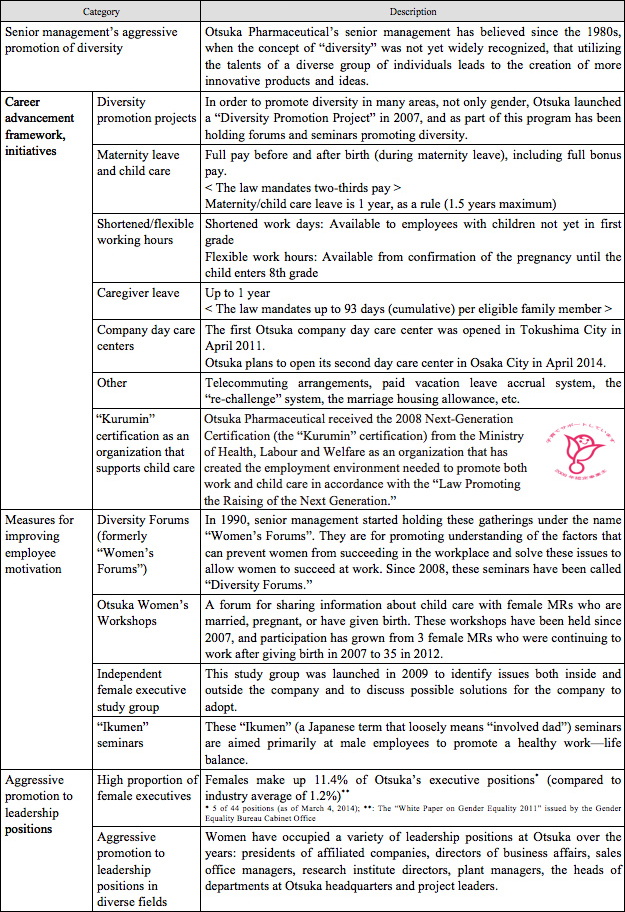 http://www.diversity100sen.go.jp) This award is given by the Minister of Economy, Trade and Industry to companies that have used diversity management to increase their value, as a way of increasing recognition and awareness of efforts to promote diversity and increasing the number of companies who promote diversity. The ministry plans to give this award to 100 companies in total over a 3-year period, which started in 2012. In 2012, 43 companies received the award.