"There is water on the moon." This project was initiated by the discovery *1 that may signal the arrival of the era for the human race to occupy the moon as a living environment. "Until now, the space travel was only possible at a national project level. Now, we want to realize it privately and get to the moon." To bring this dream closer to reality, POCARI SWEAT will challenge the approximately 380,000km journey to the surface of the moon together with private corporations possessing world's leading technologies. LUNAR DREAM CUPSULE (hereinafter DREAM CUPSULE), a time capsule that will be delivered to the moon, contains dreams of children from around the world along with POCARI SWEAT (powder) as a symbol of our precious water, delivering the message that "dream is always close to our hands."

Human beings always need fluids and ions (electrolyte). As a drink to quickly replenish fluid and ions (electrolyte) lost in perspiration, POCARI SWEAT has been supporting people since its launch in 1980. Otsuka hopes that one day youths interested in space will live out their dreams, collect the DREAM CAPSULE, and drink the POCARI SWEAT mixed with the water found on the moon.

The DREAM CAPSULE to be delivered to the moon is made out of titanium, shaped like a POCARI SWEAT can, and weighs 1,000g. To continuously endure the harsh environment of the moon where the temperature shifts from minus 170℃ at night to 110℃ during the day, the capsule was developed specifically for this project. The messages to be put inside the capsule are dreams of children gathered from visits to primary schools in and out of Japan. Messages are also accepted via the project website ( 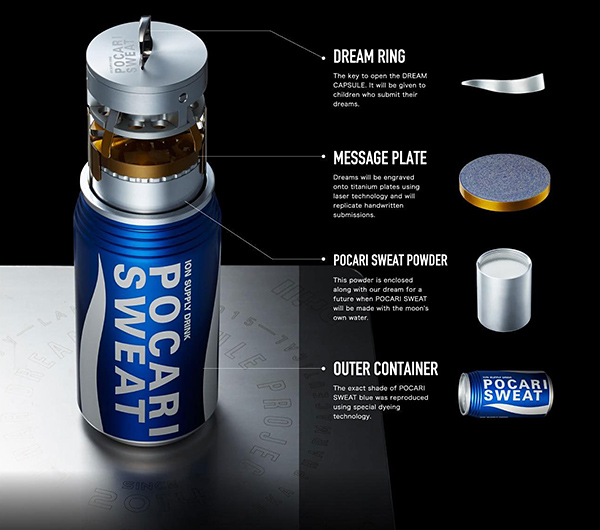 http://lunar-dream.com).
When accessed from a smartphone, a message entered to the DREAM MESSENGER can be sent by aiming a smartphone towards it only during a moonlit night.

The LUNAR DREAM CAPSULE PROJECT website also provides the project overview, team introduction, and additional contents about the moon. The website provides information such as the "history behind the discovery of moon water" and the "history of moon exploration" as well as the upcoming year's astronomical events for enjoyment for everyone. 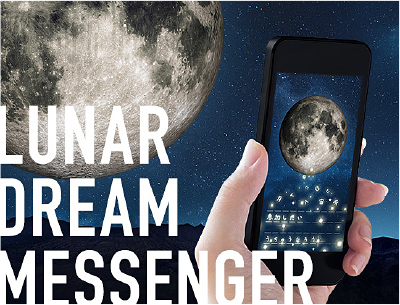 POCARI SWEAT and Activities about Space(

POCARI SWEAT was developed in 1980 as "health drink consumed in situations when people perspire" to quickly replenish fluid and ions (electrolyte) lost in perspiration. POCARI SWEAT is currently available in 17 countries and regions around the world *2. As a drink to support people on actions, POCARI SWEAT has always maintained its challenges.

POCARI SWEAT began active involvement in the space industry early, shooting the first "Space TV commercial" in the International Space Station in 2001, attracting the public attention as a groundbreaking initiative. When the LUNAR PROJECT succeeds, POCARI SWEAT becomes the first ever beverage to arrive at the surface of the moon. Move forward with dreams: POCARI SWEAT will always support your dreams as a beverage close to you.

Otsuka Pharmaceutical Co., Ltd. is a global healthcare company with the corporate philosophy: 'Otsuka-people creating new products for better health worldwide.' Otsuka researches, develops, manufactures and markets innovative and original products, with a focus on pharmaceutical products for the treatment of diseases and nutraceutical products for the maintenance of everyday health. Otsuka is a wholly owned subsidiary of Otsuka Holdings Co., Ltd., the holding company for the Otsuka Group. The chairman Akihiko Otsuka is the third generation of Otsuka family members to lead the business, whose origins date from 1921. The Otsuka Group employs approximately 42,000 people globally and its products are available in more than 80 countries worldwide. Otsuka Pharmaceutical warmly invites you to visit its global website at