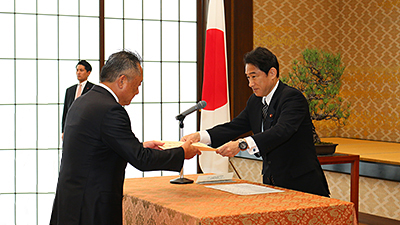 In 2003, Otsuka Pharmaceutical and 23 affiliated companies operating in Asian and Arab countries opened the Otsuka Welfare Clinic in Peshawar, Pakistan near the border with Afghanistan. Following the September 11, 2001 terror attacks in the U.S., 1.8 million refugees fled war-torn Afghanistan to neighboring Pakistan where they faced desperate shortages of food and shelter. At the time, Otsuka Pakistan had been supplying transfusion-related products through the Red Cross. As a corporate citizen active in Asia and Arab territories, Otsuka felt a strong desire to directly support refugees in the local community. After much consideration, it was decided to establish a clinic to provide free medical care to refugees held in camps with inadequate medical care. 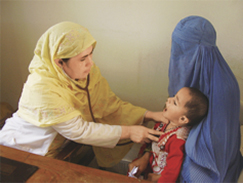 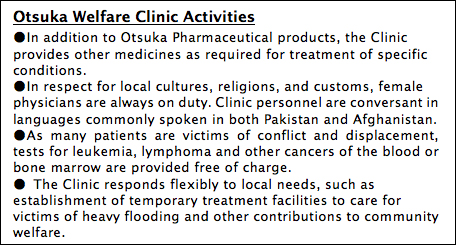 Ten years later, some 150 persons--mainly children and women--arrive daily. So far over 700,000 patients have received medical care free of charge. Otsuka Welfare Clinic received the Foreign Minister's Commendation in recognition of the clinic's support of Afghani refugees and Pakistan and promotion of healthcare in the local community over many years.
In keeping with its corporate philosophy, "Otsuka-people creating new products for better health worldwide," Otsuka Pharmaceutical is dedicated to contributing to the betterment of health around the world, implementing activities aimed at promoting health and contributing to local communities as befitting a health care company. Otsuka Pharmaceutical and its affiliates, including Otsuka Pakistan, remain committed to locally-rooted activities for promoting health.

Foreign Minister Commendations are awarded to individuals and organizations active in international fields that have contributed especially strongly to the friendly relations between Japan and foreign countries. The award is intended to honor the recipients' achievements and to promote understanding and support for their activities among the Japanese public. Commendations have been awarded annually for 30 years since 1984.

It was founded on June 16, 2003 with founding capital of USD$100,000. It has respiratory medicine, gastroenterology, dermatology, obstetrics, gynecology, ophthalmology, otolaryngology, and has eight regular staff, including three physicians, assisted by nurses, pharmacists and midwives.

Otsuka Pharmaceutical Co., Ltd., which employees approximately 28,700 people worldwide, is a wholly owned subsidiary of Otsuka Holdings Co., Ltd., the holding company for the Otsuka Group that is headquartered in Tokyo, Japan. The chairman Akihiko Otsuka is the third generation of Otsuka family members to lead the business, whose origins date from 1921. The Otsuka Group has business operations in 25 countries and regions around the world, with consolidated sales of approximately USD 14.1 billion for fiscal year 2013 (4/1/2013-3/31/2014.) Otsuka Pharmaceutical welcomes you to visit its global website at https://www.otsuka.co.jp/en.

Activities based on the keywords "health," "natural environment," and "local community" 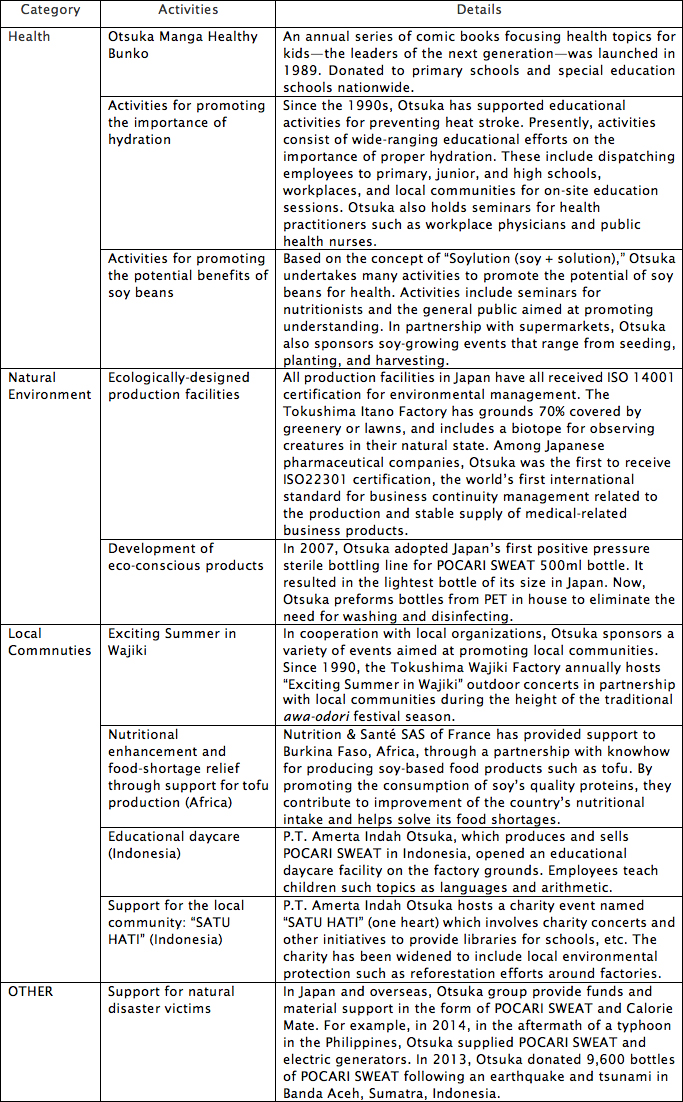