Otsuka researchers re-visited the origins of Calorie Mate for a new product since the launch of Calorie Mate Maple in 2009. In renewed pursuit of a convenient and nutritionally balanced product that provides five major nutritional elements "anytime, any place, for everyone" despite increasingly diversified eating habits, researchers arrived at a simple flavor that would be easily integrated into daily life. The challenge was to create a product containing a good balance of vitamins, minerals, protein, fat and sugars, with a refined and fresh flavor and a crunchy texture. The outcome of this dedication to an unprecedented contrast of texture and taste was the perfection of the first "Plain" Calorie Mate since the brand was launched 32 years ago in 1983.

Inspired by the idea of 'space food' the 1983 launch of Calorie Mate - compact and convenient while containing all necessary nutritional elements - marked the introduction of a new product genre known as nutritional support. The canned version, a concentrated liquid diet initially conceived for use at medical institutions, was developed as a nutritional supplement for use by members of the public. The block form, developed at a time when skipping breakfast was a growing problem, is a food that is convenient to eat on busy mornings yet still contains the five major nutritional elements the body needs. The concept was the same: a nutritionally balanced food. Containing a balance of 11 vitamins, 6 minerals, protein, fat and sugars, Calorie Mate provides approximately half the minimum daily adult requirement of vitamins.*2 Currently the top selling brand of nutritionally balanced food items *1, Calorie Mate is available in block, can, and jelly versions, and consumed in a variety of scenarios, for breakfast, at work, while studying, during sport, and in times of emergency.

The package design has remained virtually unchanged since the initial product introduction, with the nutritional ingredients listed on the packaging in English to convey the product concept of 'nutritionally balanced food'. The message is a big part of the package design. The bold yellow color and original logo catch the eye at the point of sale, and continue to be broadly appealing.

Otsuka Pharmaceutical, based on the corporate philosophy of 'Otsuka-people creating new products for better health worldwide' will continue to develop innovative products that contribute to the health of people the world over. 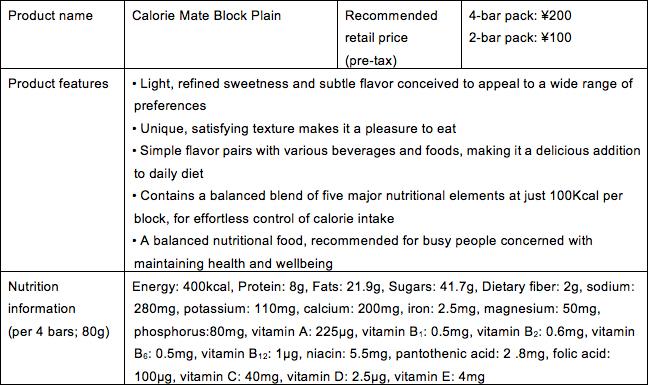